Madagán take their name from Beann Mhadagáin (Madagán’s peak), the iconic mountain that overlooks their home city of Belfast. Performing on concertina, uilleann pipes, whistles, guitar, flute and vocals, the music of this dynamic four-piece is driven by Belfast’s thriving music scene: expect songs in Irish and English, and traditional tunes from Ireland, Scotland and beyond, alongside new compositions and arrangements, all with Madagán’s unique arrangements.

Founded in 2017, Madagán have performed in Europe and further afield, including to an audience of thousands at Moscow Irish Week festival. The band has just returned from their second residency in India (funded by the British Council and the Arts Council of Northern Ireland) where they performed at the prestigious Sur Jahan festival and collaborated with the celebrated Goan singer Divya Naik on an album, ‘Madagoan’. You can listen to it here. 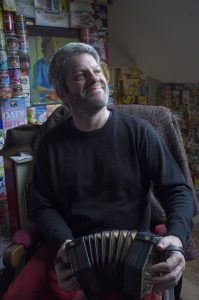 Jason has been playing for dancing from the age of 10, starting out on the 10-key melodeon. He has been playing the concertina for 30 years and is self-taught, which has led him to develop his own distinct style of playing. As he puts it, “It’s all about the rhythm”.

Jason is an integral part of Belfast’s vibrant traditional music and dance culture. He has toured with various groups in Europe, South America, Asia and the USA, and has recorded 7 albums, two of which are solo projects. The most recent of these, The Northern Concertina, was funded by the prestigious Arts Council NI ACES award.

“Jason O’Rourke’s music has matured down the years into a fully cohesive and finely-tuned style; each note executed with pin-pricked precision. He stands on his own merits among concertina players in Ireland and elsewhere” – John O’Regan, The Living Tradition. 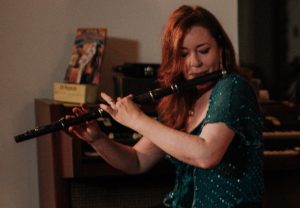 Former member of the trad band Ogham, Maria Rafferty is a session musician in her home town of Belfast and a teacher of traditional Irish music and song. She is also a fluent Irish speaker and works with An Munia Tobar ladies singing group and local primary school children to promote Irish music and singing. 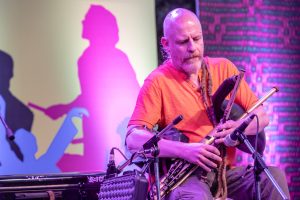 A stalwart of the Belfast session scene, Newcastle-born Steve has been playing the pipes for 30 years and is self-taught. He has played with the Armagh Rhymers and toured in Europe and India. Steve studied traditional Irish music at Falcarragh in Co. Donegal. 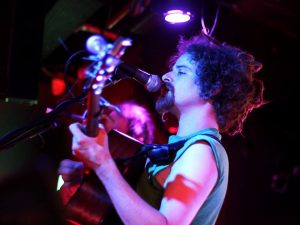 Joe is an enigmatic character, whose strong ideals are laid bare in his songwriting. His songs, powerful messages about modern life and morality, are incredibly current and, though at times brash and direct, with his coarse voice and unmistakable accent, are in equal part gentle and contemplative. He is equally well known in Belfast for his music and his social activism, with lyrics reflecting this dedication to critical thinking and action.